These sterling silver spirit beads all look more or less the same, until you closely study the carvings.  Canadian West Coast artists use lines, cross hatches, dots and other carving methods to indicate the totem.  As a couple of examples, the Hummingbird totem typically has a long beak and a flower, the Bear totem typically has a large snout and a defined canine tooth.

You may choose any totem you like, above and below we have listed the most commonly ordered ones.  In the image, you will see a Frog totem. 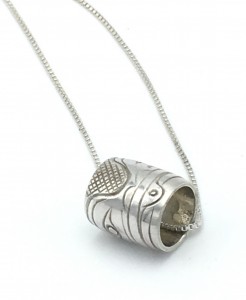 Below I have included the various meanings associated with the aforementioned totems: