West Coast Domed Band, featuring a solid sterling silver band hand carved by Canadian West Coast artists.  These rings are not cast.  Each ring is carved, by hand, in the totem of your choosing.

Please remember to note, at check out, the totem you would like as well as your ring size, otherwise we provide the totem on the ring in the image.  In this case, the totem is of the SUN.

Also, each ring is custom made just for you, so for these works of art, there is no refund and no returns. 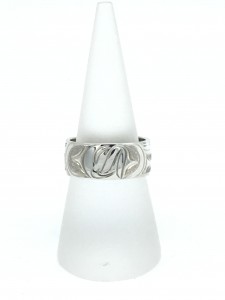